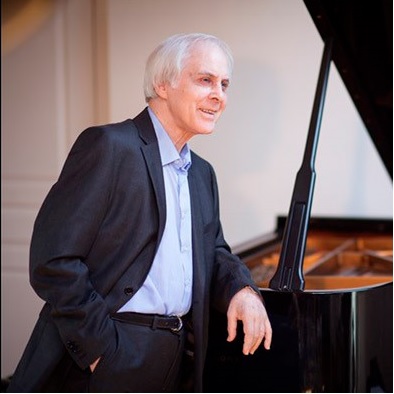 Vladimir Tropp was born in Moscow in 1939. He studied at the celebrated Gnessins Music School from an early age. His teachers were the distinguished Russian pedagogues, Moisey Feigin and Teodor Gutman, both pupils of Heinrich Neuhaus. Tropp began to give recitals and to perform with orchestras already as a student. He was awarded the prestigious Rimsky-Korsakov scholarship. In 1963 Tropp graduated with distinction from the Gnessins State Musical Institute, now named the Gnessins Russian Academy of Music. He immediately began his graduate work while teaching at the institute. Today he is reputedly one of the leading professors of this major institution of professional music education. In 1997 he became chair of the Academy’s piano department. For the last sixteen years he has worked as well as professor at the Moscow State Conservatory named after Tchaikovsky. In his teaching Professor Tropp strives to maintain the highest traditions of the Russian piano school. Several of his students have won major international competitions. In 1970 Tropp became a laureate of the International Enesco Piano Competition in Bucharest. Since then, he has constantly performed and offered master classes in Russia and many other countries: the Netherlands, Italy, Japan, Finland, the United States, German, the United Kingdom, Ireland, France, Czechoslovakia, Portugal, Canada, Costa Rica, Taiwan, Southern Korea. The principal part of his repertoire is romantic music. He has been acclaimed for performance of works by Rachmaninoff, Scriabin and Medtner. The celebrated pianist Lazar Berman has written that Tropp “is a singular and subtle artist. Sincerity and poetic manner, improvisatory freedom and rhythmic flexibility, a highly colored pianistic sound join with a powerful and strongly willed conception – these are the essential traits of the artistic persona of Vladimir Tropp….” Tropp has made a series of recordings on radio, LPs and CDs. From 1995 ten CDs were produced by the Denon Company (Japan), on which were recorded works by Schumann, Chopin, Brahms, Tchaikovsky, Rachmaninoff, Scriabin and Medtner. One of his series of three CDs entitled “Russian Miniatures” merited in 1998 the prestigious “Record Academy” award as the best of the year. Professor Tropp is a musician with a wide range of interests. He has published work dedicated to Russian and foreign performing art, as well as articles and comments on the recordings of outstanding performers. He has made a series of radio broadcasts. Most prominent among Professor Tropps’activities has been the investigation of Sergei Rachmaninoff’s creative work. He has examined all extant archives of the composer in the United States, Russia, Switzerland and Costa Rica. On this subject he has published several articles and taken part in the conception and realization of television films about Rachmaninoff. He serves on the boards of the Rachmaninoff (as a vice-president) and Scriabin Societies in Russia and is a member of the Teodor Leschetizki and Scriabin societies in the United States and the Glenn Gould Society in Canada. He has taken part in music festivals in Kuhmo (Finland), Portogruaro (Italy) and others, where he played solo and chamber music. He regularly serves on juries of international and national piano competitions, among them the F. Lamond International Competition in Glasgow, the International Piano Competition in Hamamatsu, and the Rachmaninoff International Piano Competition in Moscow.