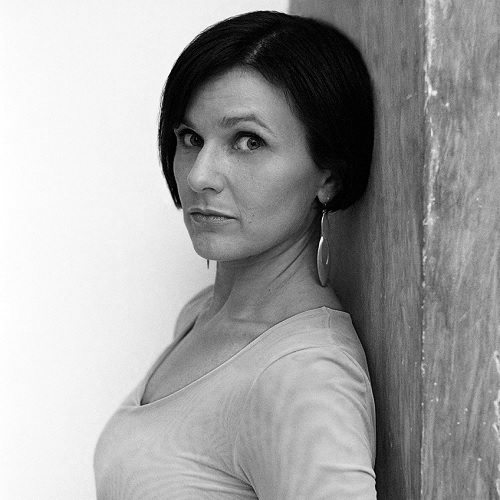 Monica Benvenuti was born in Florence, and graduated in humanistic studies and philosophy.

From 1993, the year of her debut as the protagonist in L’incoronazione di Poppea by Monteverdi at the Teatro Verdi in Pisa and at the Teatro Sociale di Mantova, and in Zanetto by Mascagni at the Puccini Festival at Torre del Lago, she has performed (always as the lead roles) operas by: Monteverdi, Peri, Emilio de’ Cavalieri, Purcell, Blow, Rossi, Haendel, Pergolesi, Cimarosa, Mozart, Salieri, Spontini, Humperdinck, Wolf-Ferrari. Frequent incursions in chamber and symphonic repertoires, with works by Mozart, Rossini, Beethoven, Wagner, Mahler, Messiaen, Dallapiccola.

Later, she has developed a specific interest in music from the 20th century as well as contemporary which has brought her to explore the potential of the human voice in relation to various musical languages and also to electronic experimentations.

In 2004 was invited by Sylvano Bussotti to star as the protagonist, Justine/Juliette in the production of “Passion selon Sade” at the Teatro de la Zarzuela in Madrid under the direction of Arturo Tamayo. In 2005, she continued her collaboration with Bussotti in Bern, performing together with him, in a unique version of “Passion”, entitled Pianobar pour Sade. In 2007 she performed Bussotti’s work again in the opera Silvano-Sylvano, at the Accademia di S. Cecilia, in a role specifically written for her. Then, she played in the live musical performance for the Rara film; she sang Furioso di Amneris , Ulrica , Eboli , Azucena e delle streghe (Milan 2013, Orchestra I Pomeriggi Musicali, conductor Tito Ceccherini and Lugano 2016, Orchestra RSI, conductor Arturo Tamayo), and Quasi il fantasia …, for voice  and piano (Paris 2016).

She was a guest of the 67° Maggio Musicale Fiorentino in the production of Il Volo di Notte by Luigi Dallapiccola conducted by Bruno Bartoletti and directed by Daniele Abbado (awarded the “Franco Abbiati” prize for Performance of the Year). She also returned to the Festival in 2012 as the star of “Four, a tribute to John Cage” , in 2013 for the Berio Day and in 2014 for a recital dedicated to Kurt Weill.

In 2006 she debuted as an actress in the monologue Not I  by Beckett, within a Trittico beckettiano directed by Giancarlo Cauteruccio – awarded by the Italian Theater Critics as the Best Innovative Performance of 2006. With Cauteruccio interpreted also Opus Florentinum, written by the poet  Mario Luzi, and C.A.N.T.O. Visions of the myth (2011).

In 2007, she played the role of the protagonist in the first production of Beards. This opera, by the Belgian playwright, Stefano Oertli, was an original revisit in of the Barbablù fable and performed, most notably, at the Theater de la Place in Liegi, at the Bozar in Brussels and at the Rennes Festival. She was a guest at the Opera di Roma in 2007 for the ballet, Georg Trakl e la sorella Grete, rivelazione e declino, directed by Beppe Menegatti, as a singer and actress, by the side of Roberto Herlitzka.

For the past few years, after extensive experience as a singer-actress – including a performance with the famous actress Milena Vukotič based on the tragedies of  Sofocle – she has dedicated herself to a repertoire of music theatre which includes operas such as La voix humaine by Poulenc, Mahagonny Songspiel, Die dreigroschenoper and Happy End by Weill, La tragèdie de Carmen by Bizet, Giorno di nozze by Gino Negri, along with works specifically composed for her. In 2009, on february 20th, she took part in  the celebrations for the centenary of  Futuristic movement in Rome: her performances of some futuristic poems have been  the sound-track for the main events of this special day.

Laborynthus II, Cries of London and A/Ronne by Luciano Berio mark the beginning of  her collaboration with the Centro Tempo Reale in Florence, that still continues with a lot of interesting productions, among which a fortunate edition of Acustica by Mauricio Kagel,  a  European live broadcast for EBU’s Birthday, a concert for the 150 years of the Musik Hochschüle of Stoccarda, the Ravenna Festival, Festival delle Nazioni of Città di Castello and Roma Europa Festival.

In the last years she performed Pas de Cinq and Der Turm zu Babel by Mauricio Kagel, Como una ola de fuerza y luz  by Luigi Nono, and various editions of Pierrot Lunaire  by Schoenberg – in 2011 in scenic form for the Concert Society of Bolzano – as well as many vocal works by John Cage.

In 2014 she joined the Voxnova ensemble, coordinated by bass Nicholas Isherwood, who debuts with Stimmung of Stockhausen in Santa Monica (California) and performs following the Biennale Arte 2015, the Italian Institute Stockholm, Angelica Festival in Bologna, University of Buffalo (USA) and many other concerts.

In 2015 she recorded for Sheva Collection “Richard Strauss: un unusual portrait” , with the pianist Giuseppe Bruno, and in 2016 – in collaboration with Tempo Reale and Ema Records – two live CD’s dedicated to Open Music from the Seventies to today.

Monica Benvenuti has been engaged for years as a teacher: singing teacher at “Giuseppe Verdi ” music school in Prato from 2000 to 2017; her students have achieved brilliant results in competitions and concert performances. Often invited to join juries, she is a founding member of the AICI (Italian Association of Singing Teachers).

From 2001 she teaches many high-level specialization master classes; in the last years, she has been expanding his activities as a teacher of contemporary singing techniques, both for actors and singers. In 2011 she was responsible of the singers’ and actors’ training in the laboratory MITO CONTEST,  organized by  Maggio Musicale in Florence, Arts Academy in Verona and Academy Silvio d’Amico of Rome.

She has been working for many years with the European Institute of Florence as voice teacher: her students – coming from all over the world – had access to the most prestigious Conservatories and Academies (Accademia di Osimo, Accademia di Cagli, Conservatory of Venice and Florence, Conservatory of Amsterdam, National Opera of Toronto, Linz National Opera, …), have won a lot of competitions and in many cases they have started an established international career.