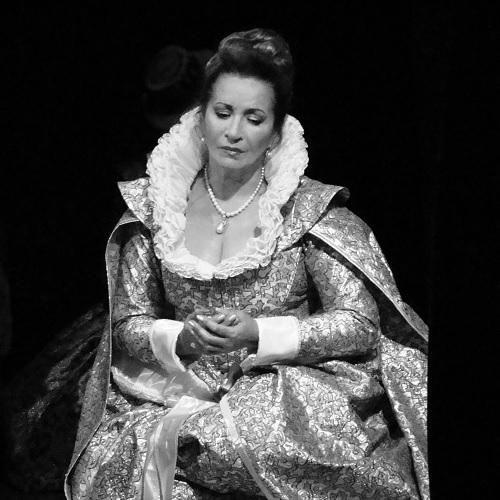 Each active participant will get two lessons (each 60 min.) with Olga Romanko

Registrations are considered according to the date of receipt.
All participants that are accepted will be notified.

Born in Moscow, Olga Romanko graduated in singing at the famous Moscow Gnessin Conservatory. In 1987, she was the winner of the prestigious International Competition in Rio de Janeiro and subse-quently took part in master classes at the Teatro Regio di Parma. Encouraged by her success, Olga Romanko decided to pursue a professional stage career. Since 1988, the Russian soprano performs regularly at Opera Houses in Italy, Switzerland, Spain, Germany and Great Britain. Parallel to her per-formances she continued with her singing and drama lessons.

After a successful debut in the role of Musetta (La Boheme), Olga Romanko started a brilliant career portraying the main roles in La Forza del Destino, II Trovatore. I Pagliacci, Madame Butterfly, Falstaff, Le Nozze di Figaro, Faust, Turandot, Un Ballo in Maschera, Aida, at the opera houses of Moscow, Berlin, Rotterdam, Zurich, Barcelona, Hamburg, Munich and Parma. She sang the Desdemona in Otel-lo at the Arena di Verona, with Daniel Oren and Placido Domingo and made her debut at the Teatro Regio di Torino in Jerusalem, under the baton of Bruno Campanella. She performed the title role in Gluck’s Armida at the Hamburgische Staatsoper, and sang in Respighi’s La Fiamma at the opera hou-se in Rome.In Las Palmas she made her debut in the title role of Adriana Lecovreur under the baton of Marco Armiliato.

In 2003, Olga Romanko performed in Un Ballo in Maschera at the Teatro Comunale di Bologna, Il Tro-vatore at the Hamburgische Staatsoper, Dvorak’s Wanda at the Concertgebouw Amsterdam. Still in 2003, she sang Aida in Brescia before leaving with the Teatro Regio di Parma for Seoul, South Korea, and later for a concert at the Deutsche Oper in Berlin.

In 2004 and 2005, Olga Romanko performed at the most famous Opera Houses around the world. In March 2006, she sang in Il Trovatore under the baton of Zubin Metha.Olga Romanko enjoyed an ou-tstanding reputation as interpreter of the title role in Tosca, which she performed successfully in Mu-nich and in Prague. In July 2006, Olga Romanko sang Aida in the Terme di Caracalla of the teatro dell’Opera di Roma “.In November 2006, Olga Romanko sang for the new production of Simon Bocca-negra in the Croatian National Opera for 6 performances and in March/April 2007, the soprano sang Tosca in Hamburg’s Staatsoper, Pique Dame in the Finnish National Opera and the role of Tosca in the Festival of San Luis in Mexico. She sang for a new production of Un Ballo in Maschera for 13 per-formances in Grazer Oper. She then followed with some performances of Aida and Tosca in the Pra-gue National Opera. In November 2007, Olga Romanko was the Princess in The Devil and Kate by Dvorak, for two concerts at the Koln Philarmonie with the WDR Orchestra and recorded for ORPHEO Label, (conductor Gerd Albrecht).In December/January 2008, Olga Romanko made her debut in the Israeli Opera as Amelia in La Forza del destino, then followed on with Tosca in Guadalajara’s Teatro Degollado in Mexico. On March, in the Teatro Sao Carlos of Lisbona, the artist performed two works by Serguej Rachmaninov, Francesca da Rimini and Aleko (Zemfira). For the year 2008, we would also like to remember the recent productions of Madama Butterfly in the Teatro Principal de Palma de Mayorca and the same work in Maribor’s Slovenian Opera Theater, followed by Aida at the Terme di Caracalla in Rome, produced by the Teatro dell’Opera, Sarka by the Leos Janacek Dutch production for the Utrecht Festival with National Radio Channel 4. In January 2009, Olga Romanko sang for the Finnish national Opera, the role of Floria in Tosca, to follow with her debut role of Lady Macbeth in the Rennes Opera, follow Tosca in Operalocarno with conduction of Carlo Palleschi. We would remember the Messa da Requiem of G. Verdi in Miland in memory of Lu-ciano Pavarotti and for benefit of Abruzzo earthquake. For the 2009/2010 seasons, the soprano sang la Fanciulla del West in the Théâtre de l’Opéra in Limoges, Tosca in International Festival Torre del Lago Puccini, Rusalka in Finnish National Opera, Il Trovatore in Teatro Comunale di Piacenza and Teatro di Bolzano. In march 2010 Olga Romanko made her debut in Moscow international Dom Musik, for an im-portant Gala Concert, with the argentinian tenor Josè Cura. For the saison 2011/12 Olga Romanko sings 12 perfomances of new production of Suor Angelica in Finnish National Opera and on the same theather, She sings in february/march 2012 the protagonist role of Rusalka, title of A. Dvorak. In 2012 february the soprano sings 3 performances of new production of La Forza del Destino in Vlamsee Opera in Antwerpen (Belgium).For 2013 saison Olga Romanko sings TOSCA of G. Puccini in a new production of Vlaamse Opera. In april 2013 Olga Romanko sings Elvira on Ernani’s work of G. Verdi with the Bavarian Radio Philarmonich orchestra, with the musical direction of Maestro Frederich Haider.

Olga Romanko sings saison 2014/15 a new production of Ernani of Giuseppe Verdi in Moravian Opera Theater of Ostrava and  Pietro Mascagni production Of Cavalleria Rusticana, on Role of Santuzza in south Bohemian Theater. Others engagements: Aida in Korea in Sugi Opera and role of Maddalena in Andrea Chenier in Moravian Silesian Theater and Aida in Narodni Divadlo Praga. Olga Romanko was international guest on Taormina Opera Star 2015, in Sicily. The soprano has sung at the Great Open Air theater of MILANO EXPO with 30,000 peoples and with the highest authorities’ state including Italian Prime Minister Matteo Renzi.