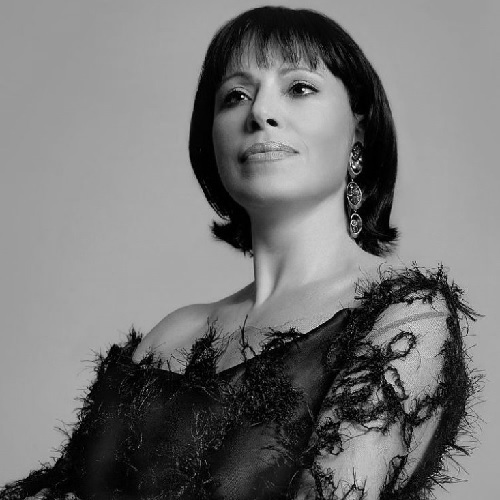 Each active participant will get two lessons with Inessa Galante.

Inessa Galante’s beautiful tone of voice, nuanced dynamics and timbre are known all over the world. She has performed for the royal families in the UK, Sweden and the Netherlands, and worked with incredible conductors such as Yehudi Menuhin, Pierre Giorgio Morandi, Myung-Whun Chung and Valery Gergiev, as well as many others.

Inessa Galante was born into a musical family and studied in Rīga at the J. Mediņš music school with instructor Rashele Sulova. After high school she initially entered Medical School, but simultaneously also started studying at the Latvian Academy of Music in Professor Ludmila Brauna’s vocal class.

Inessa Galante became a soloist at the Latvian National Opera while still a student (her first role was in Smetana’s Bartered Bride), but she considers her first real role to be Violetta in Verdi’s Traviata, staged by the Academy of Music. At the same time she often performed at the Mariinsky theatre in St Petersburg where she formed a brilliant partnership with conductor Valery Gergiev. In 1991 she moved to Germany and became the Manheim Opera and Deutsche Oper am Rhein soloist.

Inessa Galante has performed at numerous prestigious opera houses and concert halls all over the world. She started the 2009/2010 season at the Stockholm Royal Opera, singing the part of Liza in Tchaikovsky’s The Queen of Spades,then in Hamburg and Munich where she took part in a production of Verdi’s Requiem. In 2010 her voice could be heard in The Queen of Spades again, this time at the Estonian National Opera, as well as in Verdi’s Masked Ball in Helsinki, Puccini’s Manon Lescaut in Italy and at the final Gala concert of the L. Janāček festival in the Czech Republic. She has performed at prestigious opera festivals, such as the Newport Opera festival (four times), the Schlesswig Holstein Festival and Hollywood Bowl festival.

Her voice has been loved by audiences at the Champs Elysées Theater, the Montpellier and Saint-Denis festivals, the Barbican Centre and Kensington Palace, as well as the Royal Glasgow Opera Theatre and Royal Albert Hall in London. She has also performed as far away as Reykjavik, Seoul, Buenos Aires and in Israel. She is also a frequent soloist for UNICEF and at various other charitable events.

Galante’s recorded albums have taken the top places in charts in the UK, Australia, Korea and elsewhere, and in total she has sold over 200 000 copies.  Her CD The Tchaikovsky Experience recorded with the Covent Garden orchestra and conductor Neeme Jarvi was deemed by critics to be the best in over 20 years. Whereas Arias from Verdi’s late operas  was deemed by Classic CD as comparable to Maria Callas’ achievement. Galante has on occasion been named as one of the successors to the legendary singer.

Her CD Debut sold over 25000 copies in the Netherlands and received Gold and Platinum discs. In turn Arietta was named by the BBC in 2000 as the best album within the classical music nomination.  The British record label Campion Records, which has issued ten of the soloists albums, considers her to be their star.

Currently Inessa Galante is a self-employed, the world is her oyster. Every year, despite her busy schedule, Inese Galante comes to Rīga. She was the founder of the Summertime festival, which has now become a tradition, and is its patroness. This festival, held at the end of the summer in Jūrmala, at the Dzintari concert hall, brings together opera and jazz musicians, orchestras and vocal groups from all over the world. Any performance by Galante is a notable event on the Latvian cultural calendar, and tickets always sell out in advance. “I want to take you into my world,” – says the singer to her audience, and does.