The hungarian oboist Zsófia Magyar was born 1979 in Budapest, where she commenced her musical education at the Béla Bartók Conservatory. 1998 she started her studies at Freiburg with Hans Elhorst and later with Heinz Holliger. At this time she won a scholarship with the Chelius Foundation. She finished her studies at Freiburg in 2003 and had been admitted to the masterclass of Günther Passin in Munich. In 2004 she got a scholarship with the International Musical Community Center “Haus Marteau” and became trainee of the Munich Radio Orchestra. Since 2005 she holds the solo cor anglais position at the Bamberg Symphony. Since then she has played as guest with the Munich Philharmonic, the Deutsches Symphonie Orchester Berlin, the Gewandhaus Leipzig, the WDR, the NDR and the Budapest Festival Orchestra. 2007 she won a scholarship with Richard Wagner Foundation. She has also taken part in various chamber music performances with Ulf Rodenhäuser, András Adorján, Wolfgang Gaag, Wen-Sinn Yang, Mirijam Contzen and Konstantin Heidrich and is regular guest at the Chamber Music Festival Schloss Cappenberg. From 2008 to 2011 she has been teaching the cor anglais at the Academy of Music in Lübeck. Since 2015 she has an engagement for teaching cor anglais at the Robert Schumann University of Music in Düsseldorf. 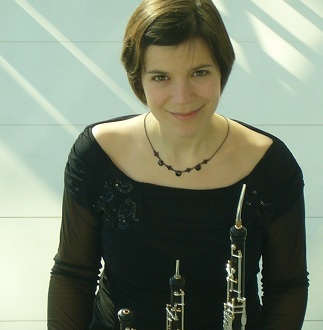