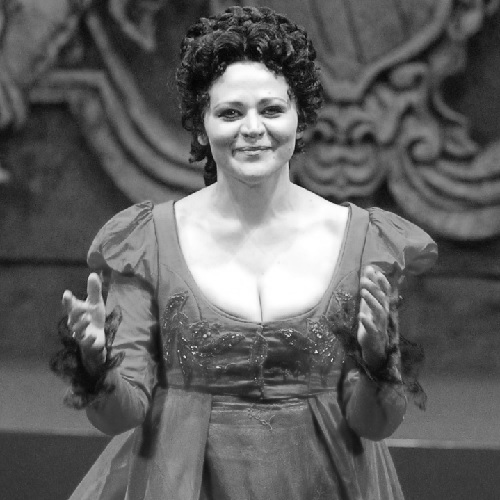 Each active participant will get two lessons with Elena Prokina.

Elena Prokina was born in Odessa, where she began to study singing at the age of 12 years. She studied at the theater and choir studio at the theater of musical comedy in Odessa.  She has got her superior education in St. Petersburg, where she studied at Theater, Cinema and Music Academy in experimental formation of musical theater and concluded her education in the State Musical International Academie Rimsky-Korsakov (class prof. Tatiana Lavrova and  class prof. Kira Izotova). As a postgraduate student, Elena Prokina was invited to join the Mariinsky Opera Company, where she made her debut in many leading parts, including Violetta in La Traviata, Desdemona in Otello, Tatiana in Eugene Onegin, Natasha in War and Peace, Marguerite in Faust and Pauline in The Gambler, until she left the Kirov Opera in 1992.

In 1991, Elena Prokina won the First prize at the Maria Caniglia International Vocal Competition (Sulmona, Italy). She was nominated for the Grammy Classical Award for performing the leading role of Natasha Rostova in Sergei Prokofiev’s War and Peace, recorded by Philips, and she received the Evening Standard Classical Music and Opera Award as the Outstanding Opera Performance for two roles: Katya Kabanova in ROH Covent Garden in 1993 and Tatyana in ‘Eugen Oneghin’ in Glyndebourne Opera festival in 1994. She rapidly became noted for her intensely committed portrayals of vulnerable heroines, roles in which she could use not only her vocal skills but also her abilities as an actress.

In 1995 she was invited to perform with Placido Domingo in“Stiffelio” by Verdi on 10-th anniversary of LA opera. From 1995 she was involved into projects of the Sydney Opera company: Tatyana in“Eugenio Onegin”(1995), Desdemona in “Othello”(2003), Madame Butterfly in “Butterfly”(2005). So, Elena Prokina took part in a cultural program of 2001 Olympics in Sydney performing Amelia in “Simon Boccanegra” by Verdi.

From 1995 Elena Prokina starts to sing on the stage of Zurich Opera House. She performs such demanding roles of Verdi heroines under button of maestro Nello Santi as Amelia in “Simon Boccanegra”, Giselda in “I Lombardi”, “I due Foscari”, and “Tosca” by Puccini. She sings Margarethe in Gounod’s “Faust” with Francesco Araisa under the button of maestro Frubeck de Burgos and “Don Carlo” with Jose Cura.

From 1997 Elena establishes long collaboration with the Amsterdam Opera Company: she is starring in “Eugenio Onegin”(production of Iohannes Schaaf), in “Othello”, in the title role of “Jenufa” by Janacek.

At the same time Elena Prokina leads intensive concert activity singing14-th symphony by Schostakovich in Barbican Hall during Shostakovich’s Festival in London in1993, and ‘War requiem’ by Britten in Saint-Dennis Festival in Paris, in Peenemunde with maestro Mstislav Rostropovich. She appears often in her solo concerts in Wigmore Hall with broadcasts of BBC3 radio. She is regular performer in Royal Albert Hall(“Eugenio” Onegin” in 1994/96 and “Simon Boccanegra” in 1997; “Alecko” by Rachmaninov, Marina Mnischek in “Dimitry by Dvorak; in National Favorites program), in solo recitals  in Barcelona Opera House and Gent Opera House.

Elena Prokina has taken part in the Edinburgh, Glyndebourne and Aldeburgh Festivals in the United Kingdom and the Bregenz Opera festival in Austria (‘Kitezh’ by Rimsky-Korsakov), as well as having appeared in opera houses such as the Teatro La Scala (‘Les dialogues des Carmelites’ by Poulenc and ‘The queen of spades’ by Tchaikovsky), Milan, the Teatro Colon Buenos Aires(The Queen os Spades’ by Tchaikovsky), the Royal Opera House Covent Garden in London(“Katya Kabanova’ by Janachek and “Othello” by Verdi), and in San Carlos in Lisbon (‘Onegin’ by Tchaikovsky), Monte Carlo, Houston, Dallas, Los Angeles(“Don Giovanni’ by Mozart), San Francisco(“Onegin’ and ‘La Bohem’ by Puccini).

Elena was invited for Master classes to Britten Festival in the UK, to Porto(Casa della Musica), Hamburg(Academy of Schnittke), Geneva(Atelier Les Musicales des Ferney), at Neumunster in Luxembourg.

In 1995 Elena Prokina installed herself in Luxembourg and established constant collaboration with chamber orchestra “Les Musiciens”(Orchestre de Chambre du Luxembourg) and its director of orchestra programmes Joseph Groben.  During 12 years she appeared in different baroque concerts programmes: Hayden (Ariadne aus Naxos and Berenice’s scena), Boccherini’s Stabat Mater, Bach and Mozart cantates, Mendelssohn (Salve Regina); in concert UNESCO in the conservatory of Luxembourg as well as in Thaikovsky’s ‘Eugene Onegin’ concert performance and opera concert in the theatre of Esch.

From 2008 to 2012 she studied in Luxembourgish University, (Master of Learning and development in Multicultural and Multilingual Context). At the same time she was invited by director of Alfred Schnittke International Academy in Hamburg Holger Lampson to develop and employ her integral opera program for vocal students of the establishment. After series of seminars during 2009-2014 she created with her students a musical performance of “Alice in Wonderland” with instrumental music of Bach, Satie, Beethoven and other composers.

In 2014-1015 she was working on her own projects with her private pupils – two opera-buffa ‘La Serva Padrona’ by Pergolesi and ‘The Telephone’ by Menotti.  The next project was prepared during springtime 2015.This is the farce of Anthon Chekhov ‘The Bear’. Performance has been presented in the Theatre Centaurus in Luxembourg in July 2015.

From October 2015 Elena has been invited to teach academic singing at Anton Rubinstein Music Academy in Dusseldorf.